So here is the latest piece. I kept thinking it was finished (it wasn't). I had it pinned up on my wall and there was something continuing to nag at me. There was one area that just wasn't quite working for me so I kept going back to it and trying to "fix" it. Finally on about the tenth attempt I tried working on a different area which changed the feel of the piece for me and made it better (in my opinion). It also helped me make a few minor adjustments to the area that had been bothering me and voila! I posted it on Facebook with the comment "I think it's finished" (because I STILL wasn't 100% sure) and got a lot of positive response. Now it's being framed for a show I have opening next week so I guess that's that.

Someone asked me in one of the comments on FB how I know when a piece is finished. And to quote Hamlet, "...there's the rub." It's hard to explain it because it's partly based on artistic principles and partly based on a visceral sense of whether the piece is "working." The composition needs to be pleasing and have a sense of balance, and the colors need to coexist in a dynamic and pleasing way; but the final decision is really more of an intuitive sense, like a calm that has replaced the unsettled feeling that something just isn't quite right. Sometimes it can be the smallest of things. And sometimes I'm just pushing to be finished when it just needs more work. At least that's how it works for me!

In addition to the finished piece I've post some of the work-in-progress shots I took along the way. The 5 and 6 are a couple from the end of the process when I was fussing. The others show more of the progression earlier on. 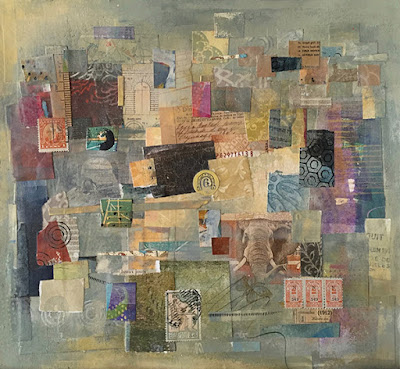 Posted by junquille at 6:01 PM